Just a vibe. This song could be 20mins long and we'd just keep listening.


This will wash over you. Yes it will.


Who doesn't like an animated Gummy and candy coated pop?

Will this band get huge or fade out after a few tracks? Seems like their building some momentum

MØ has captivated us since "Lean On" with Major Lazer and DJ Snake and she continues to bring it with originals and covers like this one of Babylon Zoo's Spaceman. 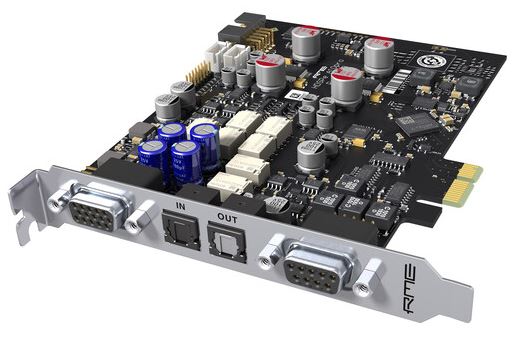 The HDSPe AIO Pro from RME Audio is the successor to the HDSPe AIO. The “Pro” adds an improved clock, additional headroom and switchable I/O levels of +24 dBu, +19 dBu, +13 dBu, +4 @ 0 dBFS. We've been running the original AIO in one of our systems for several years with great results. When the AIO Pro was announced we wanted to see if the improvement in specs would be worth the upgrade. We also had to consider if we'd be willing to give up our AO4S-AIO-192 AIO expansion card and its 4 additional analog outputs as RME no longer offers this option with the new AIO Pro.

The AIO Pro uses the same drivers and Total Mix software so it's an easy upgrade. Just replace the existing AIO in the same slot. The AIO and AIO Pro use the same breakout cables. However, we found it curious that RME flipped the position of the connectors on the card. That threw us off at first when we attempted to connect the breakout cable to the same position on the card. We assumed they would be in the same position. We're not sure why the engineers decided to do this but in a custom installation with minimal access to the computer it would have been helpful to have the connectors in the same position as the original AIO. We're also still perplexed why RME does no include the proper balanced breakout cable with the AIO Pro. Who is using the unbalanced stuff with a $1k sound card?  Of course, we already have the balanced version from our original AIO but anyone buying an RME PCIe card for the first time might be disappointed when opening the box to fine RCAs.

So how does the AIO Pro sound? The RME AIO Pro sounds great. It has a slightly more lifelike and velvety sound than the original AIO. There's a little more air and space and more detail. It's also a very quiet card. With the card connected and output at maximum with our external mixer and monitors cranked up, there's just the sound of air and the inherent noise in the external electronics. The AIO Pro is nearly dead silent with no interference audible from the PC. This provides for a transparent and clean mix that is critical when mastering.

Is it worth upgrading from the original AIO to the AIO Pro? Is it worth giving up the 4 additional analog outputs from the AO4S-AIO-192? For some folks probably. We don't use the AO4S-AIO-192 as much as we originally thought we would but we still really like having it when we need it. Also, the AIO still holds it own it against its big brother the AIO Pro. Many folks might struggle in a blind test to pick out the difference in sound between the two. We believe the AIO Pro is more lifelike and clean but RME's last two releases are both really good. So the specs are better and the sound is better but if you're currently happy with your current AIO don't expect an OMG moment.

If you can benefit from the improved specs, tighter clock, switchable output levels and the subtle increase in sound quality than the AIO Pro is certainly worth considering as an upgrade.  If you're in the market for an extremely versatile and master quality PCIe sound card for the first time the AIO Pro should be at the top of your list.

Visit RME for all the specs and features of the AIO Pro.


The 4th made us think of this anthem. We never get tired of Skylar's voice.

Like Gwen Stafai meets the Cocteau Twins and Flock of Seagulls. Mezmerizing, fun sonic candy. Looking forward to hearing more of their stuff