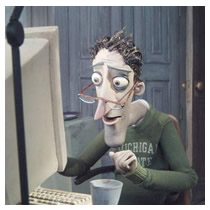 Yes the dad in Coraline is wearing a Michigan State sweatshirt and yes Coraline is the correct spelling. This little animated gem is about a girl who moves from Michigan to Oregon and stumbles onto an alternate fantasy world along the way.

A few people spotted the MSU sweatshirt wearing dad in the trailer for Coraline and it turns out the university wasn’t a random selection. Bill Mechanic, executive producer of the film and MSU alum 1973 made sure Coraline’s father was sporting a Spartan sweatshirt in the film. When he found out the animators had originally put him in a maize and blue Michigan top he was none too happy.

Mechanic who has a resume that includes: Titanic, Braveheart, and There’s Something About Mary told the animators, “You can't do that in a movie I'm producing," Mechanic says the fix in stop-motion animation was costly and cumbersome, but well worth it. “I think everyone thought I was kidding.”

It must be fun to have that kind of juice in Hollywood and makes us wonder what March Madness will be like this year around the offices of Mr.Bill.