Shure SM7B vs. Electro-Voice RE20 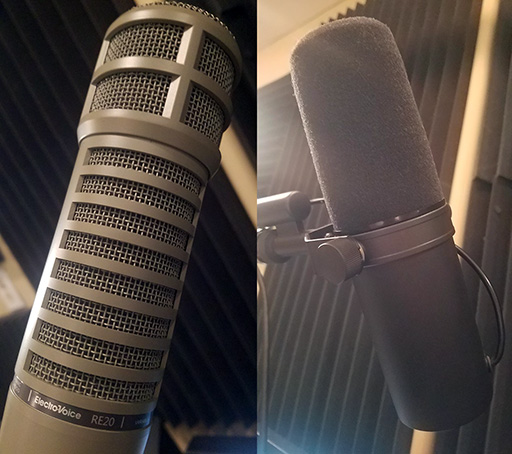 The SM7B and RE20 microphones from Shure and Electro-Voice are the benchmark dynamic mics for professional broadcasting in the sub $500 range. You can usually find both mics in the $400 range with the Shure SM7B offering a better value as it includes a proper mount and wind screens. The EV RE20 comes with a well made but simple mic clip that is a little more cumbersome on a boom stand.

We've used both mics over the years but usually in separate studios. So we finally got some time to enjoy both mics in the same setting with the same signal path and decide which one we prefer if we had to choose one primarily for live broadcasting. We tested a variety of signal paths and preamps which included gear from Daking, True Systems, DBX, FMR Audio, Mackie and Yamaha.

The RE20 is perhaps the most recognizable dynamic mic on the planet. It's a beautiful and functional design with minimal proximity effect and just looks awesome in that timeless fawn beige color. The RE20 is really good in a setting where the talent may be interacting with other folks, turning side to side and perhaps not really paying much attention to the mic. The Variable-D design works as designed and you can move considerable distance around this mic with very little effect on timbre. Even without a wind screen or isolation mount the RE20 minimizes handling noise, popping Ps, and is very good at isolation. It's a little more sensitive than the SM7B and will pick up a little more of background noise and HVAC. The bass roll-off switch is easier to access and quickly refer to versus the SM7B which is on the back of the mic and requires a flat head screwdriver to set.

The RE20 sounds great on voice and instruments and can take high pressure levels. We also did a test recording acoustic guitar and singing with just the RE20 in the room the results were solid for a quick and easy setup to get down ideas with good fidelity. Same goes for the SM7B. It sounds great on everything and you can scream out lyrics to your hearts content. Both of these mics are proven, tough designs that should provide years or quality service.

Both of these mics are industry standards. Give them a good preamp, a little compression and EQ to taste and you are off and running. To our ears however, the RE20 is lacking a bit in the mids. We found ourselves fiddling with knobs on our gear a bit more with the RE20 to dial in the sound versus the SM7B. This is probably something we wouldn't notice with just an RE20 in the studio but compared to the SM7B it took more work for us to dial in the sound the way we like it. Subjective yes. So your ears might prefer the RE20 right out of the box.
The RE20 looks the part. It's just such an awesome looking piece of gear. The classic color, the heft, the grill, it's just beautiful. Aesthetically, you can't go wrong. However, the SM7B is a smarter design. The clever isolation mount is less obtrusive and allows for the mic cable to run along the boom stand if needed. It's just more stealth and sleek. So in a setting where you might not see the talent the RE20 is excellent. In a setting where the talent is on camera the SM7B is a better choice.

To our ears the SM7B sounds better and the proximity effect is not an issue. It's easy to dial in a sound we like and adjust our mic technique accordingly. At first, the RE20 has a more flattering sound perhaps because of the slight attenuation in the mid frequencies. However, over time we preferred the flatter response of the SM7B. The SM7B also includes two switches for bass roll-off and boosting mids. The boosting of the mids can be helpful for some voices to help them cut through the mix. For both mics we preferred to engage the bass roll-off feature and leave it at that.

So when we consider sound and practical use we like the Shure SM7B better. It's a flatter sounding microphone that we can EQ to taste so we're not fighting the sound characteristics of the mic right out of the box. It works better with a noise gate in less than ideal conditions such as computers or HVAC noise in the space. We really like it paired with a Daking Mic-Pre One and the RNC 1773 from FMR Audio.  We also had less sibilance to tame using the SM7B.

To be clear this is not a binary choice. These are both great microphones and anybody should be excited to own either of them. If you're lucky enough to own both even better. The RE20 is amazing on drums and other instruments and is built like a tank.  We wanted to like the RE20 better than the SM7B because we think it just looks cooler. However, in the end the SM7B is our choice for dynamic mic especially in an on-camera podcast setting or less than perfect studio conditions.  Again, both great mics but if we could only choose one we'd pick the SM7B.

Visit Shure for more information about the SM7B

Visit Electro-Voice for more information about the RE20