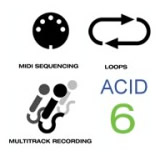 ACID Pro 6 is the ACID we've all been waiting for. It remains true to its pick, paint and play intuitive interface and adds professional level multitrack and MIDI capability. Sony also beefed up the effects package and includes a paired down version of Native Instruments KOMPAKT sample playback engine as well as a library of samples from the Sony Sound Series. That's a pretty attractive bundle for under $400.

When I first fired up ACID 1.0 back in 1998 I was instantly hooked. However, since it lacked the MIDI and multitrack capabilities I needed, it became more of a musical phrase generator more than anything else. I would often start in ACID and then export my various creations as WAV or AIF files into another program. ACID Pro 6 changes all of that. Now it's possible to build a solid foundation with loops and build on top of it with live instruments and external MIDI gear. Having that ability makes it a true musical environment versus a remix or loop engine.

ACID Pro 6 now includes full automation support and works with external control devices. You no longer have to tweak all the settings using your mouse and keyboard. The plug-in support is much better too. We used both the WAVES and Universal Audio plug-ins with great success.

Sony now supports a wider variety of file formats for importing and exporting in ACID Pro 6 including MPEG, QuickTime, Real Media and others. However, we were disappointed to learn the MainConcept MPEG plug-in requires an upgrade. There's nothing worse than attempting to render a file and learning it's going to cost a few extra bucks for that capability. MPEG gripes aside, ACID Pro 6 makes an excellent platform for composing for video.

ACID is one of the most intuitive music making programs on the planet. If you can't get your groove on with this software it's time to think about another hobby or profession. For the rhythm challenged there's a Beatmapper tool that does a pretty good job of analyzing audio, finding down beats and locking it to what's already in your mix. With 4/4 style rhythms it does a pretty good job and often nails it spot on. But when things get complicated don't expect ACID to do the work for you. You're responsible for your own trip.

Visit Sony Media Software for more information and all the specs on ACID Pro 6.