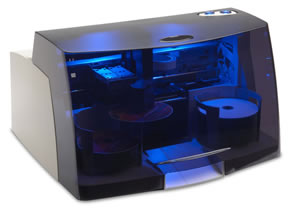 The improved robotics makes the Bravo Xi2 notably faster, up to 300% according to Primera, and quieter. We set up a dedicated PC for DVD and CD jobs in our editing room and the rumbling of the Bravo Xi2 really didn’t bother us. Previous generation Primera products make considerably more noise due to the use of a lead screw instead of the improved belt drive in the Bravo Xi2. We didn’t get out the decibel meter or stopwatch but it’s clear this unit is quieter and also quicker at picking and placing discs.

We installed the PTPublisher software package on an aging Dell Optiplex system running Windows 7, so nothing special about the PC hardware. PTPublisher along with an OEM version of SureThing label software provides everything you need to rip images of CDs and DVDs and make professional looking labels. You can also author a variety of other data and AV discs inside the software package. The software literally walks you through each step of the process. We were reluctant to use PTPublisher at first having gotten used to the spartan Primo package bundled with the Bravo XR but have come to appreciate the prettier if not slightly bloated PTPublisher package. Newbies will love it.

We made several 100 disc runs of CDs and DVDs. The burns worked great and the labels looked stunning on Taiyo Yuden Watershield glossy white media. We did have to spend a little time calibrating the printer so it would print exactly centered on the disc and we’d like to see improvements on the utility used to calibrate the printer. It’s the least friendly procedure and seems like it could be integrated into PTPublisher in a more effortless way.

The CD Ripping utility in PTPublisher, previously known as PTRip, was a bit frustrating to use. First, the BravoXi2 had trouble picking and placing stamped music CDs. It kept grabbing two CDs instead of one and placing them in the drive which of course caused a problem. When it successfully loaded a disc and retrieved the metadata from the Net it kept insisting every subsequent CD had already been loaded. We’ve used PTRip with a Bravo XR and never encountered this issued. Since this is not our primary use of a product like the Bravo Xi2 it’s not that big a deal but frustrating nonetheless.

Our only other gripe is the form factor. The Bravo Xi2 is quite chubby and needs significant real estate to operate. In Kiosk mode it must be slightly elevated as well. We much prefer the basic box design of the Bravo XR series to the flip top design of the Bravo Xi2. A lid that slides into the metal casing like a motorcycle helmet would be a major improvement.

Now that Primera has spoiled us with a faster and quieter design we're ready for the next wave of improvements to the form factor. The Bravo Xi2 is still a fine choice for your duplication needs if desk real estate is not an issue.