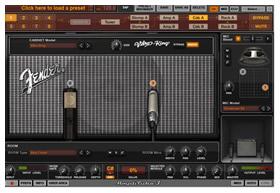 AmpliTube 3 from IK Multimedia is the latest version of the popular AmpliTube series that’s packed with new amp models, stomp boxes, mics and cabinets. More is the operative word when it comes to AmpltiTube 3.

We’ve been looking forward to this release since our first impression with the Jimi Hendrix series. We figured we’d hear a few more amp models, a few more effects and maybe another speaker cabinet or mic model. Suffice to say, we grossly underestimated the folks at IK Multimedia

Playing with AmpliTube is addictive. With previous versions it became a default plug-in for everything from guitars to analog synth parts and vocals and drums just to add some character. We fell in love with the SLIGHTLY overdriven clean sounds and the effect of a well placed wah pedal in a static setting for dramatic filter effects. It’s been impressive since day one and it’s easy to forget it’s sound emulation and not a real mic’d cab.

AmpliTube 3 is built on the same basic flow as previous versions: a single tuner feeding two complete Stomp Box / Amp / Cabinets / Rack effect signal flows. As before, AmpliTube 3 provides multiple series / parallel setups for these modules, so it’s easy to run two complete rigs at the same time, or have two pedal boards simultaneously feeding a single amp with two different cabinet options. Eight routing options are on offer here, so you’re bound to find a configuration that suits your needs. You’ll also see a preset browser and a Speed Trainer and both of these have undergone a major face lift.

New in AmpliTube 3 are a number of options. A full 31 amp models are included, and some of these are very welcome surprises. In addition to the expected (yet still great) Marshall and Fender options, you’ll find both a blue face and a copper face Vox model, “classic” and triple rectifier Mesa / Boogie simulations and even an Orange OR120™ that will launch you into power chord heaven. And for our four stringed friends, they have included four thumping bass head models to get the low end moving. Add to this 51 stomp boxes, 15 microphone choices, 46 cabinet options and 17 pieces of rackmounted outboard gear and you should expect to spend a bit of time checking out the sounds on tap.

We can’t cover everything here but there are a few truly incredible additions to AmpliTube 3 that make it stand apart from earlier incarnations.

Let’s start with the stomp boxes. Expect to enjoy the fuzz boxes, flangers, phasers and wah pedals as much as ever, but be prepared to be amazed by the step filter and the swell pedals. By rhythmically adjusting filter resonance (Low pass, Band Pass or High Pass) the Step Filter turns gently strummed chords on a Ric 12 string turn into a percolating pseudo-techno background texture. And if blooming, backwards sounding volume swells are your bag, try the...wait for it...Swell pedal. Essentially an auto wah – but for volume control instead of filtering. For a truly WOW experience, try these two effects in series and strap across the bus for your background vocal submix. Add a bit of amp drive, sit back and enjoy.

Next comes the Cabinets and Microphones: Similar to previous versions but now you get two! Yep. In version 3, each of the cabinets in the signal chain can be mic’d by two mics – both user selectable from a stunning array of options. What’s more, each mic can be freely moved from center to outer part of the speaker cone and set near, far or anywhere in between. Add variable room reflections, relative volume and individual mic panning and you can get some very serious spatial effects. This addition in particular makes it easier than every get a great guitar tone to sit around a lead vocal.

The Speed Trainer is no longer a simple MP3 player with speed control, this is a full bore 4 track digital recorder with tempo and pitch controls. This particular feature is rapidly becoming a favorite as I no longer have to fire up my DAW for getting ideas down before they go away. Now everything is on one easy–to–use screen.

The Preset browser is very logical addition. As there are now so many sonic options crammed into AmpliTube 3, they have kindly included a database driven Preset Browser that allows you to quickly find a great starting point for your next sound by sorting on any of a number of options such as instrument type and sound character. Prepare to spend some time playing here as you will explore for hours.

If it seems as if we’ve glossed over the amp models…well…it’s just because they’ve always been so good. If you liked the previous blackface Fender tones, or Plexi Marshalls, then you’ll dig the mid 80’s Boogies and 70’s Oranges. But what really makes this the “Go To” option for a variety of instruments and vocals is the effects, cabinets, mic'ing options and the overall usability tweaks.

AmpliTube 3 is more than a simple facelift. They have re-imagined the concept to extend far beyond being a guitar amp simulator and have created a comprehensive audio processor that can be used on any audio source that needs to be tweaked, brightened, fuzzed, fizzed or generally whacked out. If you finish a project and have only used AmpliTube 3 on the guitar tracks…well…you missed out on a lot of fun and a lot of great sounds.

Of course, a serious piece of software such as AmpliTube 3 requires additional processing power compared to previous versions to truly be useful. Our system didn’t lock up as long as we kept multiple instances of the software in check. If we went beyond 3 or 4 instances of AmpliTube in a project a bit of halting and crackle was noticed when launching the interface for tweaking and knob twiddling. Once the settings are made, however, the audio artifacts go away. So while it may slow the workflow a bit it’s still workable. Our test machine was an Intel Dual Core system with 3.16 GHz CPUs and 2.5GB of memory.

During our review we received notification of a patch for AmpliTube 3. We didn’t experience any unusual behavior prior to installing the patch but it’s nice to know IK is actively providing updates and staying ahead of any issues. Apparently this update addresses quite a few compatibility issues with different DAWs.  The ability to view actual parameter values during the knob twisting sessions is a nice addition as well.

If you’ve tried AmpliTube before, then you have no doubt already downloaded the trial version and been rocking out. If you’re new to AmpliTube than make sure you have a long weekend in front of you before you install this software. You’ll need some serious time to play.