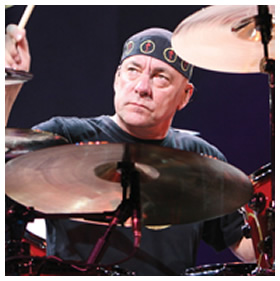 Sonic Reality just unleashed “Neil Peart Drums Vol. 1: The Kit”, a music software recreation of the legendary sound of Neil Peart. Nick Raskulinecz, producer/engineer for Rush, Foo Fighters, and other bands with massive drums sounds worked with Sonic Reality to create the authentic sounds of Mr. Peart and make it available as a sound library for sample playing software such as BFD2 and Kontakt.

It’s pretty epic. The samples can be tweaked with features such as deep level dynamics, humanized random alternating hits, discrete multiple mic mixing and more. Sonic says this deluxe sampled kit is an ultra-realistic recreation of Neil’s actual acoustic set as used live on tour and in the studio.

We can’t wait to play. Neil is a rock god and drum legend. His technique and the sound of his kit on “Moving Pictures” is still a benchmark in dynamics, clarity and overall kickass playing style. To think you can pick up a legendary sample set like this for under $150 is insane. Insanely awesome! We’re expecting greatness from this product and we’ll tell you more after we rock out a bit with it.