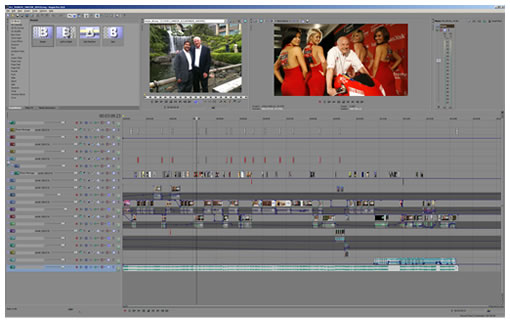 To start, Vegas pro 10 can handle just about any kind of file format. We recently finished a 22 year tribute video for Eli Harari, the founder and former CEO of SanDisk. We digitized in VHS tapes from the early 90s (that’s when we found this old Fry’s ad that made us laugh, check out the hard drive), and a batch of beta tapes as well. We scanned in old photos and grabbed high quality TIFs and PDFs from more recent press kits. We shot a bunch of new interviews in HD with the Sony EX-3 and Panasonic HVX200. We grabbed VOB files from DVDs of television appearances and press events. Lastly, we had employees from different regions of the world submit videos in a variety of formats shot on handhelds and smart phones and throw them up on the FTP site.

When all was said and done we had nearly 400GB worth of source files in nearly every possible format. Vegas never blinked. We trimmed and dragged and dropped until our heart’s content. The only files we had to “trick” Vegas into using were the VOB files from the various DVDs. By right clicking the containing folder we were able to “see” the files and drag and drop them to the timeline.

Our P2 footage which requires the Raylight Ultra codec needed the very latest version to work in Vegas 10 even thought it was already working fine in Vegas 8 and 9. No biggie and Raylight updated the codec just a few days after the release of Vegas 10. XDCAM files from the Sony EX3, as expected, were easy to play with in real time. By the way, the EX3 is easily one of the best bang for buck options for shooting in HD today however we still like the ergonomics of the Panasonic cameras better.

For this project we created both DVD and Blu-ray masters as well as a variety of streaming formats. We added a new Quadro 2000 to an aging HP xw8400 workstation in hopes of taking advantage of the CUDA cores. Sony says with certain codecs, such as AVC, the NVIDIA GPU may speed rendering times. While we didn’t get out the stopwatch, we didn’t notice any practical improvements. Rendering our 15 minute video still meant walking away and doing other things, sometimes for hours. We have a new z800 workstation we’ll be setting up for testing and hope we can get these wait times down to a more reasonable pot of coffee.

Sony has beefed up the rendering presets to make it easier to find a good starting point when outputting video. The Sony AVC codec yields outstanding results and allows you to create a master file that can be uploaded to YouTube in HD and used for Blu-ray or archiving. We also re-rendered this master in FLV using the On2 codec and were happy with the results. So it seems like Sony chose the correct codec for GPU acceleration. Hopefully we'll see the use of CUDA cores expand throughout the applicaton over time.

There’s lots to discover in Vegas Pro 10 but a couple of things that make us happy are the third party effects support and the ability to apply effects to an individual event versus the entire timeline. NewBlue Inc. has a variety of plug-ins that are very useful and fun to play with. This has created an “app” marketplace within Vegas which makes it incredibly easy and affordable to jumpstart your creative flow. The Vegas Production Assistant 2.0 developed by VASST has some useful features such as batch processing and automatic photo montage tools but the Grafpak (lower third samples) timed out which caused a series of irritating popups everytime Vegas Pro 10 was started. We had to completely uninstall Production Assistant 2 to lose the popups demanding we purchase these marginal pre-made lower thirds. Sony, please figure out a way to decouple this from Production Assistant 2. VASST says installing the latest version, 2.07, should solve this problem.  However, it's a poor user experience to be bombarded with these messages in the first place.

We really enjoy working in Vegas Pro 10. Our favorite feature of Vegas is really the flexibility. You can work in a very structured way or very organic and free form way. The format support is outstanding and there’s no right or wrong way to add stuff to the timeline. You can create new sub clips or simply copy and paste the same source files all over the timeline. The use of the right mouse click in Vegas 10 is brilliant. Right mouse click anywhere in your project, media, timeline, viewer…etc and you’ll have a plethora of options to help you keep moving forward.

Vegas Pro 10 was generally stable but we were able to get it to crash when rapidly scanning video or moving around assets while the timeline was playing. Once we figured out the behavior that caused the crashes we stopped it and behaved in a more reasonable fashion. But still, we'd like to see the QA team uncover these various quirks so the product team can make it more bullet proof. You shouldn’t have to be “careful” when you’re being creative.

Sony Vegas Pro 10 has outstanding audio capabilities but we did enounter buffer errors when using Universal Audio plug-ins on multiple tracks running on the UAD-1 and UAD-2 cards. Running plug-ins only on the master output did not yield errors. So in the end we did our audio mastering in Saw Studio. The Universal Audio plug-ins are very popular and we don't have these issues in Sony ACID Pro 7. We asked Universal Audio about this and they acknowledged this is a known software bug with no fix at this time.

There's lots more to cover and we didn’t even touch on the 3D capabilities, DSLR editing, and other capabilities of Vegas 10. Perhaps we’ll dive in deeper with the new workstation and share our findings here.

So apart from a few hiccups here and there we still find Vegas Pro 10 one of the most intutitive, powerful and downright fun audio video packages for professional use.