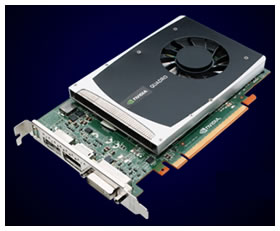 The NVIDIA Quadro 2000 is a mid-range professional graphics solutions and an excellent choice to extend the life of an aging workstation or jumpstart the build of a new one.

We replaced an older Quadro FX 4500 with a new Quadro 2000 in an aging HP xw8400 workstation to see if we could extend the life of the system and make room for an additional audio DSP card. NVIDIA has really made significant progress on a number of fronts with the new Quadro lineup and we love both the performance and aesthetic improvements.

Before, a card with the processing power on par with the Quadro 2000 would have been longer, louder (more cooling) , two slots wide and required external power. After we popped in the Quadro 2000 our workstation was quieter, consumed less power and we now had access to an extra PCIe slot so we could add an additional audio DSP card for mastering. These improvements alone make the Quadro 2000 a compelling upgrade. Add 1GB of GDDR5 memory, 192 CUDA cores, 2560x1600 resolution support, with the 3 display options (2 active) and you have a really solid choice for a video editing system that relies mostly on CPU power but can still benefit from the CUDA cores.

Our test system is one of our workhorse systems which we use for everything from audio mixing and mastering to video editing and compositing. Applications frequently used on this system include Sony Vegas Pro, Combustion, SAW Studio and the Adobe suite. Most of our apps benefit primarily from CPU horsepower and memory. However, Sony and Adobe recently started taking advantage of the GPU CUDA cores inside NVIDIA’s lineup. Combustion of course plays nice with OpenGL.

For example, Vegas Pro now benefits from this acceleration when rendering MP4 video using the advanced video codec (AVC). This is a good place to start since AVC encoded files yield exceptional quality and are the perfect format for uploading files to YouTube in HD. Rendering still takes significant time with or without GPU acceleration and in practical terms we didn’t notice that much difference. We still had to walk away from the machine and grab a cup of coffee while our AVC renders were running.

One area where performance was improved was in jumping around the timeline in Vegas while editing HD video and being able to preview video at higher resolutions. The response was more instant and the video less choppy. However, it’s impossible to attribute this to the Quadro 2000 entirely as we are constantly swapping components, hard drives, software revs…etc., but we can say the Quadro 2000 played very nice with the rest of the system and certainly contributed to improved performance. Again, just the fact that we were able to add another DSP audio card because the Quadro 2000 only takes up one slot helped our work flow tremendously.

At funkyfresh we’re not in the business of running benchmarks and you can find plenty of sources that do. While we do value these benchmarks, in practical terms we don’t make money by running them. We make money by creating great content for our clients in the most efficient manner possible. So the bottom line is does the Quadro 2000 provide the level of performance you’d expect at its given price currently hovering about $450. The answer is yes. There’s also piece of mind in the form of long product life cycles and frequent driver updates. If we can get another year out of an aging workstation while working on building a new system and dealing with road bumps like Intel’s Sandy Bridge issues, we’re happy.