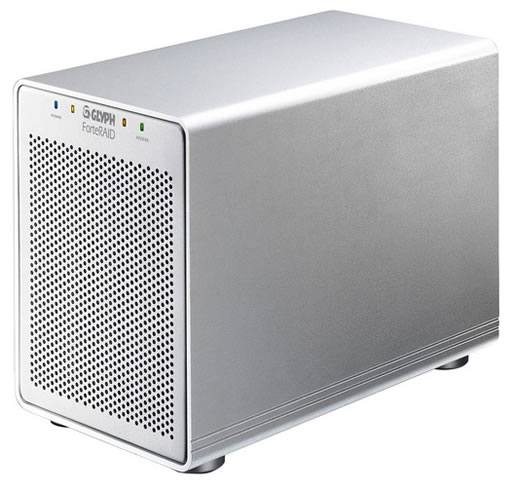 The 12 TB ForteRAID from Glyph Production Technologies makes a very good first impression right out of the box. The aluminum housing is well designed and provides easy access to the 3TB Hitachi Deskstar drives inside. The aluminum case, vertical orientation of the drives and 80mm fan kept everything running smoothly during a 3 week test of the ForteRAID where it was in constant use.

The ForteRAID includes eSATA, the various flavors of Firewire and USB 2.0 for easy connectivity to both Mac and PC platforms. We expect USB 3.0 in the very near future but for now the fastest option is eSATA. Glyph includes a basic eSATA card but recommends the Sonnet E4P card and we agree. The Sonnet E4P played nice with the Dell T7500 and provided 4 external ports with the performance to realize the speeds benefits of the ForteRAID. The Lacie Quadra external backup drive worked well with this card as well.

The ForteRAID comes preformatted for Mac as a RAID 0 array for maximum performance. We often have to access Mac formatted drives using MacDrive from Mediafour so our system was ready.

The ForteRAID 80mm fan runs full tilt at startup and makes more noise than the T7500 blowing all that air but after 30 seconds it slows down enough to become barely audible. In fact, other than the initial startup it doesn’t make much noise at all. We love that. We also like that Glyph chose to design the unit with 1 large fan versus two smaller ones. Anything to minimize noise in the studio is a good thing. Placed 6 meters or so away from our condenser mic we could get away with doing a voice over in the same space if we had to.

At first, we kept the ForteRAID in RAID 0 to maximize speed as our “online” drive and were satisfied with the performance while editing a wide range of formats such as P2, Intra 100, 50, XDCAM and HDSLR, or any combination thereof. All the typical RAID options for mirroring and striping are available but we opted for performance while backing up data to another drive.

Later we decided to test the unit in RAID 10. The Glyph utility makes it very easy to create a new RAID. THe hardest part is simply backing up all the data before making the switch. We were happy with the performance in RAID 10 which also gave us a little more piece of mind with some built in redundacy.

We look forward to the day when these units are populated with SSDs, too expensive today but likely to hit $1 per GB in 2012 which many industry analysts see as the tipping point for market acceptance and things could accelerate rapidly after that. For now, a backup strategy is critical especially in RAID 0. By the way, SSD solutions should still be backed up as both spinning and solid state media can fail. However, SSDs are clearly far more robust because of the lack of moving parts.

We really like the case and the power supply of the ForteRAID. It’s well designed and made of quality parts. The internal power supply eliminates the need for a wall wart which makes us very happy.

Glyph also has very progressive warranty as well. The ForteRAID has a 3-year warranty that includes a free 2-year basic data recovery. It shows Glyph has confidence in the product and that if something does go wrong they’ll do what they can to help the customer.

If you’re in the market for a robust and well-designed RAID array we highly recommend you consider the ForteRAID line of products from Glyph.

UPDATE:  After a few months of use the ForteRAID failed.  The software utility was unable to "see" the RAID and could not be used to troubleshoot the problem.  The unit was sent back to Glyph.  The circuit board was replaced and it was discovered that one of the Hitachi drvies had failed.  The unit was operating in RAID 10, so 1 drive failing should have allowed us to replace the drive and rebuid the array locally without sending it back to Glyph.  We think this failure indicates the importance of using enterprise class drives in these products.  Also, regardless of what type of RAID scheme is used, a second on-site backup is required or serious downtime can occur.