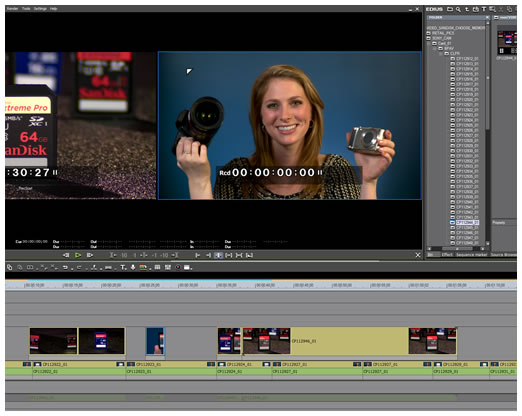 Edius 6 is a very solid NLE for assembling footage very quickly. Our first experience with Edius was several years ago with an early version of the software cutting news for a broadcast station. Since that time we've worked on all the major NLEs such as AVID, FCP, Vegas and Premiere. Upon revisiting Edius we were pleasantly surprised to see how this software has matured.

Without glancing at any documentation we were able to quickly assemble the rough cut of a "how to" video we needed to get out the door. This brought back memories of why we enjoyed using Edius to carve out sound bites. It's fast and friendly and handles a wide variety of formats with robust codec support including XDCAM, AVC-Intra and DVCPRO.

We installed Edius 6 on three different systems. An older HP xw8400 workstation, a new Dell M6600 portable workstation and a custom Supermicro workstation. It ran well on all three running both XP and Windows 7. We did get it to lock up now and then but it did not crash. It was more like a temporary freeze.

Edius ships with a USB dongle that is required for use after the initial 30 days. We're not fans of this type of authorization scheme simply because USB dongles are just too easy to lose. We do like being able to run the software on the laptop in the field and on the workstation in the studio using the same dongle but the possibility of losing the dongle in the field or misplacing it prior to a crtical edit under a time crunch makes us nervous and is a near deal breaker.

Activation and authorization is an issue for the industry as a whole as software piracy runs rampant but legitimate customers deserve a better scheme. We asked Edius about the this but were told no decision has been made about future releases and dongle support.

Dongle woes aside, we enjoyed using Edius 6. We think it's ideal for cutting news, corporate video, sports reels, pretty much anything where time is of the essence. It really works the way you expect it to when quickly assembling an edit. The way the handles on the video in the timeline allow for gross movements and fine tuning and how easy it is to move clips around the timeline is ideal for news.

The real time editing is very clean and does not require constant rendering to preview. For long form story-telling, we like being able to have quick access to  multiple sequences. Again, with some experimentation we were able to figure out how to do the same work we might do in other NLEs we're currently more familiar with.

Grass Valley includes a bonus CD of software in the package but it was a little unclear how some of it worked. The NewBlue plug-ins worked fine but the others did not install properly and gave us errors. So while it's nice to see the plug-in support it's a bit disheartening that we experienced some problems with the bundle.

After spending more time with Edius 6 we realized it has quite a bit of power under the hood with the ability to do key frame effects, titles and transitions all natively without any plug-ins. The multicam editing is drop dead simple, batch rendering is super handy and in general it comes with all the necessary capabilities to do quality work and output myriad formats for physical media, broadcast and streaming.

We also appreciate when an update to the software we're reviewing appears as it did during our review of Edius 6.  It's affirmation that Grass Valley is actively working to stabilize and improve this release which was already mostly problem free in our tests.

Now, all we need is a dongle free, 64-bit version.