Adobe vs. Avid vs. Grass Valley vs. Sony vs. Apple 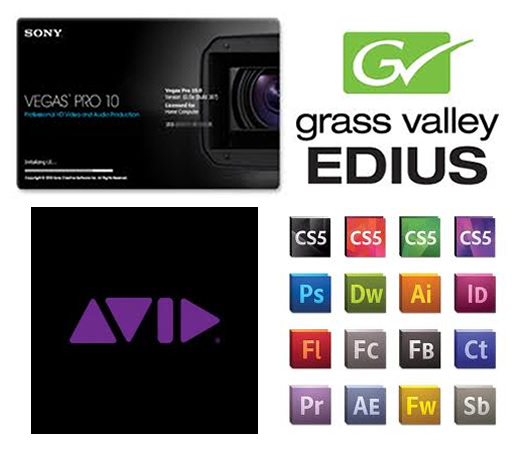 What editing package do you use? What should I buy? Do I have to be an Avid editor to work on films? Is Premiere replacing Final Cut? I hear good things about Vegas. Should I try it? We hear these questions over and over.

Usually you’ll get these questions answered in a very biased way with very little context on how the software package is actually used or what its particular strength and weaknesses actually are. Part of the reason is that it’s difficult for 1 person to have a profound understanding of all the major NLEs and give an objective review. You tend to get a bit biased toward platforms you master. There’s a huge difference between simply getting a project out the door and making something really come to life using a particular NLE.

We’ve spent quite a bit of time with all the major NLEs either as a producer or editor. Sometimes we’ve had the luxury of weeks to work on a project but more often than not it’s about speed and the ability to turn projects very quickly.

In the end, the ability to quickly turn around a quality visual asset has less to do with the tool than the producer’s clear direction and the editor’s mastery of the platform to bring that vision to reality.

Sure, some things are easier in one NLE versus another but aside from high end finishing and post work amazing story telling can be accomplished using tools from Adobe, Avid, Grass Valley, Sony or Apple.

The real decision when choosing an NLE boils down to workflow and the markets you serve, the number of people in the facility and the IT infrastructure. Avid and Final Cut tend to dominate in the larger shared drive model because of established work flows and expertise in dealing with large amounts of data and longer more complex projects.

Premiere is playing a much larger role, especially in design and post houses that likely use a suite of Adobe products already. The Mercury engine and optimization for CUDA cores has made a huge difference. We never would have considered Premiere a few years ago and now it’s gaining serious momentum.

News organizations love Edius. It’s fast, runs on modest systems, is rock solid and easy to use. The USB key is getting long in the tooth and the GUI could use a refresh but we love using Edius. The stability really makes it attractive for in the field, laptop jobs where computing horsepower might be somewhat limited.

Vegas has outstanding audio tools and is another great tool for assembling cuts but has gotten less stable in recent years. Sony has kept pace on features and codec support but needs to make the software more stable.

So again, any of these tools can get the work done but it ultimately depends on the type of job, the turnaround required, and the level of production quality expected. For example, we recently cut several videos in a hotel room during a conference because the videos had to be turned around in 24 hours. The production quality was expected to be broadcast ENG with some titles and minor effects to sex it up a bit. The work could have easily been done on Final Cut, Premiere, Vegas, Edius…etc. However, in this case the editor showed up with Media Composer 6 on his Dell laptop workstation because that’s the software he did his “best and fastest work”. We had another workstation running Edius, Premiere and Vegas.

We worked simultaneously on the project, exchanging work using P2, ProRes and the DNxHD codec. In the end, when looking at the final output it was seamless and it didn’t matter what was cut on which machine and who rendered what. The project got done. The quality was excellent. The client was happy.

Whether we cranked it out in some state of the art facility or holed up in our hotel room didn’t matter. In fact, what was more important than any software we used was our ability to quickly move lots and lots of data from machine to machine, render, FTP, approve, iterations…etc. It’s becoming less about that actual tools being used to make things and more about the IT infrastructure, either fixed or mobile which allows the work to get approved and posted online as fast as possible.

What adobe is doing with the coming rev of Premiere 6 is just a taste of what’s to come. Having access to an army of artists that can crank out amazing product using a temporary cloud model could have a profound impact on the business. Based on the huge crowds last week at NAB Adobe has the community to help it power this new model. And in the end, the platform with the largest community of talented artists will secure more business.

The most relevant platforms today are still Avid, Final Cut and Premiere in terms of user base across industries. But things are shifting. Both Avid and Adobe have gained users and some momentum as a result of the polorazing effect of Final Cut X. Apple may even drop it's desktop business altogether. Who knows? Meanwhile Edius and Vegas are chugging along with a solid and enthusiastic base of users. We love both and are looking forward to both Edius and Vegas bulding an even stronger user base going forward. Our advice to editors would be to familiarize yourself with all platforms and master at least 1 of them and a motion graphics tool such as After Effects. That should keep you plenty busy with projects.