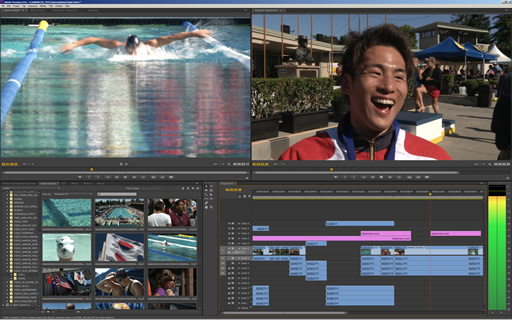 Adobe's Creative Suite 6 Production Premium includes a wealth of updates to Premiere, After Effects, Photoshop, Audition and the rest of the suite. This review will focus on the updates to Premiere Pro CS6, our main area of interest.

Premiere Pro CS6 has enough power under the hood to attract the Final Cut community that feels abandoned by Apple and perhaps a few AVID editors that are curious about what's on the other side of the wall. Long time Premiere users should be very happy with this new release.

For starters we love the new "adjustment layer". Basically you throw an adjustment layer of any length on top of your timeline, tweak the settings and effects and all layers underneath the adjustment layer will respond to the changes as if they were made individually to each layer in the timeline. This is extremely useful and a real time saver. We will use this a lot.

Next up is "Hover Scrub". It works just like it sounds. Move the mouse right and left over the thumbnails in the media browser and you can quickly find what you're looking for without formally dropping the media in the trimmer or timeline. Again, handy and practical. We also like the project view which adds small icons to media thumbnails so you know if a particular asset is already being used in the project. These little touches show that Adobe is paying attention to how editors really work.

Other nice features of Premiere Pro CS6 include the "Warp Stabilizer", "Rolling Shutter Repair" (handy for cameras like the HPX250), an improved effects paradigm, better color correction, multi-cam support and a customizable GUI which we like for a cleaner layout and elimination of buttons we rarely use.

Adobe also went crazy with the render presets in Premiere Pro CS6. The full gamut is included from smart phones and tablets to large screens and everything in between. All the right codec support and a huge selection of starting points for your renders. Setting up watch folders to encode multiple formats is real easy too. The folks at Sorenson should be a little nervous.

We primarily worked with AVC-Intra 100 files in our test of Premiere Pro CS6. Our favorite P2 format is one of the best on the planet but it's processor intensive.  On our HP, Dell and Supermicro SSD equipped test systems with NVIDIA Quadro, 2000 and 4000 cards the experience was real time. Content loaded fast. We could easily jump around the timeline and the software felt connected to the media.  The GPU support and mercury playback engine makes for improved real-time performance and renders.  Again, when software starts feeling more like hardware that's a good thing.

Solid, predictable performance is important for us.  CS6 is really the first version of Premiere Pro we've truly enjoyed using. Sure it was functional before but now it feels better. The tweaks to the GUI make it easier to find content and start editing right away without arbitrary steps that seemed to get in the way in previous versions of Premiere. The same can be said for adding effects and overall workflow.  In other words, the software is now getting out of the way of the work.

Audio is still a weak link for us in Premiere Pro. We liked Audition back in the Cool Edit Pro days but have since moved on to other audio editors that we simply like better.

This year could be a very pivotal one for Adobe, especially as it relates to Premiere Pro CS6. For years the post community has embraced AVID and Final Cut as the leading platforms for editing with Premiere, Vegas and Edius providing a supporting role.  That's changing.  We felt it at NAB and we feel it even more now.  Adobe is playin' for keeps.

So what's Adobe been doing to whip CS6 into shape? Well it seems the product team is listening to its users.  Crazy, we know.  Maybe there really is something to this whole social enterprise thing that Marc Benioff touts every year at Dreamforce. But really, this is the version of Premiere Pro we think a lot of editors have been waiting for and longtime Premiere users will greet with an exultant, "Finally!"

Visit Adobe for more information about Premiere Pro and the entire CS6 lineup.