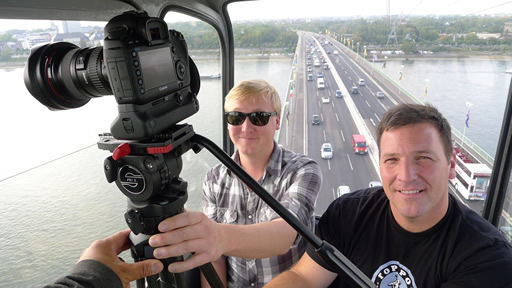 We just finished this video shot solely on the Canon 5D Mark III. Originally, we were going to use the Sony EX3 or Panasonic HPX250, both which work very well in a conference setting where portability and a versatile lens are required. However, this time we opted for the Canon 5D Mark III to give the piece a little more of that cinematic look everyone is after these days.

Canon made some really nice improvements with the 5D Mark III including the improved 22.3 megapixel CMOS sensor, and 61-Point autofocus with extended ISO range. This camera is capable of taking great still and HD video making it extremely versatile, especially in tight situations. Of course, a handful of your favorite EF lenses are required to get the variety of shots you want.

One of the best parts of using a DSLR to shoot video is the ability to travel with less stuff and a smaller overall footprint. We easily fit everything in the hatch of a small wagon. For once, our audio engineer and DP were lugging the same amount of stuff. Sachtler sticks and a Zacuto Scorpion rig came in handy.

The downside to using a camera like the Canon 5D Mark III is you might find yourself in a situation where you don’t have the right lens on the camera to capture the shot you anticipated getting when the unexpected happens. However, for the most part with good planning we were able to swap lenses in time for most of what we wanted to shoot.

Unlike the C300 that has proper XLR connectors the Canon 5D Mark III features a mini stereo plug. For our interviews we fed audio into the camera via mini stereo connectors from the Sound Devices mixer and also captured audio directly to compact flash on the mixer as a backup. Sure, we prefer the XLRs on the C300 for audio but in this form factor the mini-stereo plug worked just fine and having the backup files made us more comfortable.  Video was recorded in 1080p at 30fps using the H.264/MPEG-4 AVC codec in a .mov wrapper. At the end of nearly 2 full days of shooting we had about 110GB or data.

The video codec used on the 5D Mark III is not ideal for editing. On the same systems we edit AVC-Intra 100 and a variety of other source footage without any hiccups, the MPEG4 AVC codec used by the 5D tended to bog things down. When you think of how aggressively the codec works to maximize the amount of video that can be saved to flash memory it's not surprising.  We ended up rendering initial rough cuts of interviews and broll as AVID DNxHD files and working with these. This was well worth the extra step for better real time previewing and finishing.

Overall, we were very impressed with the 5D Mark III for capturing both stills and video and found it to be an incredibly versatile camera.

Visit Canon for more infomation on the 5D Mark III.