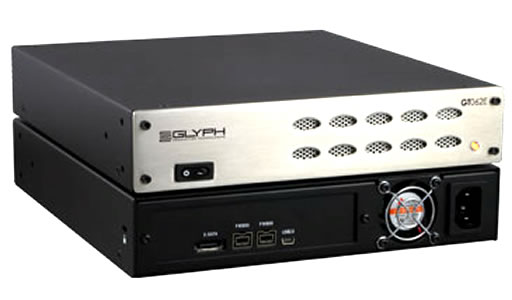 The 6TB version of the Glyph GT 062E external RAID can be configured as JBOD, RAID 0 or RAID 1. We tested it in both the RAID 0 and the RAID 1 configurations and were generally pleased with the performance.

Glyph Technologies created a solid box with an internal power supply to house the two internal 7200 RPM SATA drives. The GT 062E starts up quickly and creates just a bit of white noise. We placed it on the desk in the edit suite and it was barely audible. Placing it a few feet away or in a rack and the sound of the GT 062E will be masked by other equipment in the room.

The case includes a cooling fan that sucks in air through the nicely designed vents in front and out the back of the unit. After prolonged periods of use the case never appeared to heat up much. This is the opposite of passive designs that rely on the case as a heat sink. Over time this could become a noise issue once the fan starts to fail but we like the peace of mind knowing the drives are being ventilated properly.

The Glyph GT 062E performs best in RAID 0 mode. We primarily used it with Avid DNxHD files and native P2 formats such as AVC Intra-100. However, in RAID 0 mode the GT 062E takes much longer to be recognized by the system when first connected. Whether using USB, eSATA or Firewire modes the RAID 0 configuration can cause some frustration. We connected it to a couple of workstations with the Sonnet E4P card installed and experience the same slow initial behavior. When we change the configuration to RAID 1 we didn’t experience any strange delays in the drive being recognized and ready for use.

We don’t find the Glyph Manager software very friendly or useful. It reports the status of the drive but doesn’t seem to have much functionality other than changing the RAID configuration.

We’d primarily use the Glyph GT 062E as a backup and transfer drive between sessions and vendors versus an online array. It’s great to have a rugged, portable drive set in RAID 1 with nearly 3TB of usable capacity and a built in power supply. Firewire 400/800, eSATA and USB 2.0 offer plenty of connectivity although USB 2.0 is really a turtle for large amounts of data. USB 3.0 and Thunderbolt should be included in next gen products to keep pace.