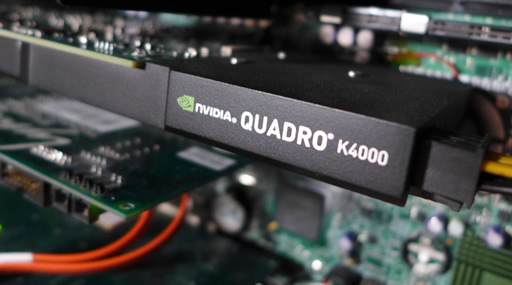 The NVIDIA Quadro K4000 Kepler based cards are a nice step up from the previous generation Quadro 4000 Fermi based cards. This card is in the sweet spot of workstation performance and is a solid choice for users considering a single slot design in the $800 price range.

The Quadro K4000 has upped the CUDA cores by 3x to 768 and 1GB of memory for a total of 3GB of GDDR5 memory. Most impressively perhaps is the reduction in power consumption. This single slot design now has a maximum power rating of 80W. This made a huge difference in our workstation with quieter and better overall system performance.

The K4000 can drive multiple displays but in most cases we find ourselves driving 1 large display, such as a 30inch at 2560x1600, versus multiple displays. This gives us lots of real estate and detail without shifting our eyes back and forth. Most of the creative houses we work with have artists in front of 1 large display with the occasional video reference monitor, of course. However, we mostly used just 1 display with the K4000. For advanced high-end visual computing needs or video walls you can drive multiple displays using DP 1.2 resolution of 3840x2160.

In our working environment, noise and sound are an important consideration. We don't have the luxury of an isolated workstation we access remotely in the edit suite. Our test Supermicro workstation does not have the interior space or optimized workflow that a Dell or HP workstation benefits from. It’s tighter inside the Supermicro case and requires more active cooling from the mid-plane fans. Our test system was fully populated with 1 SSD and 7 HDDs. We also used every available slot for sound, DSP, SATA III and either eSata or legacy firewire cards, all generating some heat.

This system is primarily used to run the Adobe CS6 suite, the Sony Creative suite, Grass Valley Edius, Combustion and myriad utilities, effects plug-ins and compression apps. We’re still waiting for Apple to unleash its new Mac towers so we can test the Quadro K5000 Mac version with Smoke 2013. However, for now we’re very pleased with the performance of the K4000 in our Windows 7 workstation. We like that NVIDIA is active in the pro video community and actively working with companies such as AJA, Blackmagic Design and Matrox to further utilize its designs and improve performance and workflows.

We ran this system continuously from the time we got the Quadro K4000. It's been about three months and it’s been rock solid. All of our creative suites run butter smooth and benefit from fast render times when using codecs that exploit the extra CUDA cores. Premiere CS6 and its Mercury engine love the K4000. We like the instant previews, real time editing and general performance that feels more like pure hardware. The H.264 renders in Vegas under specific settings were very fast but the software doesn't always take advantage of the GPU for rendering.

The previous Quadro 4000 was hot to the touch after extended use and occasionally our system fans would cycle up and down as needed to keep the system running cool. The Quadro K4000 runs warm to the touch and our system fans do not cycle up and down. Because the Quadro K4000 consumes less power and produces less heat it’s less taxing on the system overall.

With better performance and less power consumption in the same single slot footprint the K4000 is a worthy upgrade over the previous generation Quadro 4000.

Visit NVIDIA for more information and all the specs on the Kepler line of Quadro workstation cards.