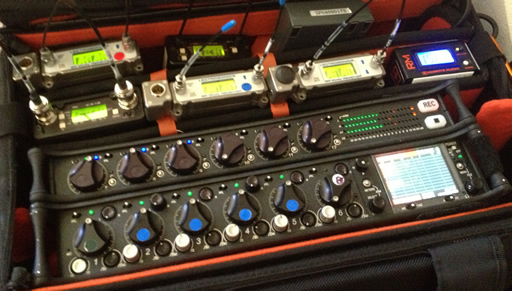 The Sound Devices 664 is a mixer than can do it all and so much more. One of our regular sound guys just updated his rig to the 664. He's been up and running for about six months and we wanted to get his real world review of the 664 in action.  The 664 has been put to use on all the major networks, reality programming and sporting events.

Here's his take. From corporate shoots to run and gun reality jobs I have a new level of confidence work with the Sound Devices 664. The brand has really established itself as the industry standard that you'll see on 9 out of 10 shoots and for good reason. When sound is just as important as video, which for us is always, you don't want to mess around.

The Sound Devices 664 is a far more capable mixer that has made my life easier in the field. The 664 features six 6 XLR inputs backed by incredible pre-amps that provide that clean, crisp sound with plenty of headroom. Whether I'm doing a simple single camera shoot or multi-camera production the 664 gives me plenty of flexibility.

With two 10 pin Hirose connectors you get one simple cable connecting to camera sending a stereo mix with also a stereo return going back from the camera to assure that what you are sending is 100% clean. Standard left and right output XLRs also have their own separate return making the 664 have 3 stereo returns to monitor to assure that everything is hunky dorie. And if that's not enough you have another pair of TA3 outputs just in case you have to send more out.

What I love most about the 664 is the LCD screen. It displays all the metering, returns and menu controls of the mixer. With just 2 push buttons it's easy to navigate through the settings and make quick and easy adjustments.

Oh, and let's not forget it is also a full-fledged digital audio recorder as well. Borrowing DNA from the Sound Devices 7 series of recorders, the 664 can record 10 channels. Two of the channels are a left right mix, 6 are isolated channels and the last 2 are for the auxiliary channels. The aux channels are completely assignable and also have their own dedicated outs separate from the other 4 main outs which gives you even more capability.  We always record.  If anything goes wrong with a feed to the camera or something happens in post we always have pristine backups on the 664.  These days we often shoot with a 5D Mark III workflow so pristine audio from the 664 is essential for post.  We had one scenario where the memory card in the 5D was curropt but the producer was able to salvage the interview with the recording of the inteview on the 664 and broll.   We've had good results on the 664 using 64GB Extreme Pro compact flash cards from SanDisk.

For example, say your producer has 2 cameras and he/she wants channel 1 and 2 of your mixer to camera A but also wants channel 3 and 4 going to camera B. Well with the aux outs that's no problem. Before the 664 I'd have to bring a second audio mixer to pull this off.

So that's pretty sweet. The 664 is a 6 channel mixer that is also a full-on timecoded recorder with plenty of outputs. Get a curveball thrown at you, no problem. You still have 2 more separate aux outs in your back pocket and its all displayed with a easy straight forward LCD screen.

But wait there's more. What is this a Ronco ad? With the Sound Devices CL6 adaptor attached to the 664 you now get a total of 12 channels! Crazy!

So yeah, I'm pretty happy with the 664. It's my go to workhorse. It has a small form factor for bag applications and is very light so all this kick ass sound stuff doesn't break my back. Nice.

For the complete specs and more information about the 664 and other Sound Devices products assembled here in the US check'em out here.