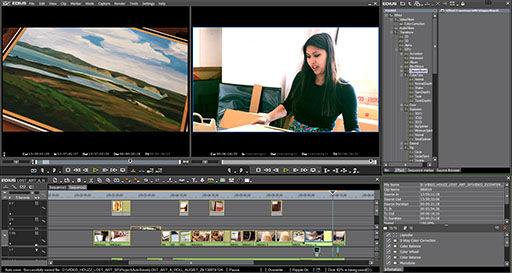 The good news is Edius 7 should benefit from a more open platform going forward. The bad news is anyone upgrading from recent versions such as 6 or 6.5 will have to get new plug-ins for Edius 7 or wait for current plug-ins to be upgraded to 64-bit. You quickly realize how handy a plug-in like Colorfast or Titler Pro is when you no longer can use it.  Plug-in vendor, NewBlue has said an update to Titler Pro is in the works while proDAD has already released service packs for some of its plug-ins. So it appears the 3rd party plug-in support will be there for Edius 7 going forward although we’d like to see more at launch.

Edius 7 is 4k ready. Grass Valley has done a good job of keeping up with codecs and formats over the years. We're starting to see interest in 4k pick up especially with the new found love affair with the Sony FS700. We're seeing this camera more and more on reality shoots.  You'll be seenig a lot more slow motion in reality TV as a directy result of this camera.  Sure, we're not there yet in terms of 4k playback but it's coming. What HD did to SD 4K will do to HD. In the meantime the ability to have multiple framings and play with the extra pixels in 4k while delivering in 1080p is a real luxury.  The layouter in Edius makes this super easy.

Today, the majority of our work is shot using the C300, 5D Mark III and various P2 cams. All of these formats edit like butter in Edius and the Canon XF codec and multi-folder creation of the MXF wrapper is not a problem. Edius is smart enough to scan all folders once you point it to the root. It's fast too. We like seeing that green progress bar float across the screen.  Sometimes other NLEs choke on the Canon XF codec resulting in a slower workflow.   Cutting C300 footage in Edius 7 is easy.

Edius 7 will take advantage of multiple CPU cores, memory and GPU power. Our roughly two year old test system with dual hex core XEONs, SSDs, 24GB of memory and Quadro K4000 provided excellent real time performance.  We also tested Edius 7 on a quad core i7 laptop with 8GBs or memory and it performed very well cutting in the field.  Render times were longer of course but Edius 7 does a good job of maximizing the use of available resources.  On both systems we only experienced 1 crash and none since updating version 7.2 of Edius.  By the way, we were able to install Edius 7 on both our field production PC and our studio workstation using the same serial number without any problems.  GPU accelerated transitions and effects look really good and preview in real time.

We expected Edius 7 to have an updated UI mainly for aesthetic reasons but it looks the same as Edius 6-6.5 and the only way we could tell the difference at first glance was an updated splash screen when Edius 7 launches.  We're fine with that.  Once we get used to using an editor we'd rather not have the controls and UI change too much.  What we care most about is performance and stability.   Edius continues to deliver on that front.   We also no longer have a problem running avast! antivirus in the background. So, that's nice.  It's rare that we have an NLE that's not online so the abiilty to run antivirus in the background is important.

The improvements to Edius 7 are mainly under the hood. Filters now support 10-bit color depth and with the right hardware real time 10-bit video output. A key-frameable Gaussian blur filter is also new, cool for rack focus effects. The GPU accelerated transitions and effects built into Edius 7 are very good and work seamlessly. Combined with the 3D Layouter, title effects and color tools you’ve got a very powerful NLE before you even add any plug-ins.   The more we get familiar with Edius the more we appreciate how much is built-in to the NLE from the get go.  We'd like to see some of the 3D GPU accelerated effects that come standard in Edius be offered in other NLEs.

Edius is still one of our favorite NLEs to cut with. It’s easy to see why Edius has been so popular with news organizations for this reason. When you need to bang out a story quickly Edius is hard to beat. It’s also very good for event and corporate work. It’s easy to learn, and now Edius runs well on Win 7.  You can pimp it out with extra hardware if you need to but can easily get by in the field with a reasonably powered laptop.  In terms of A-rolling a story and adding transitions, titles and sweetening a basic audio mix it competes well with any NLE and is certainly one of the fastest.

However, when we’re doing more sophisticated compositing with lots of layers, text, media and especially audio we love Edius 7 less. We simply cannot master our audio in Edius and have to round trip the audio to our favorite DAW to make it work. Not a killer but we’d love it if Edius had a stronger audio workflow.   The built in effects are actually pretty good and the ability to record fader movements in real time is nice.  However, we're more likely to work in Saw Studio and bring the audio back in for critical work.

Edius 7 offers a wide range of options when it comes time to render your project. The HQX codec looks every bit as good as other intermediary codecs such as QuickTime ProRes or AVID DNxHD at similar bit rates and settings. There’s also lots of other pro options such as P2 AVC-Intra 100, XDCAM, MPEG2, H.264 and more.   In most cases we’re either delivering a master quality file or uploading to YouTube and Vimeo so the rendering options available in Edius 7 are plenty. If you have the need to regularly provide a wide variety of playback formats you may need a third party program in addition to Edius 7.

So, if you're running Edius 6 or 6.5 should you upgrade now? Maybe. If you're happy with the performance and 8-bit color depth is working for you and you have a variety of 32-bit plug-ins, you may want to hold off for a bit. However, if you've embraced a 64-bit workflow and you want the best possible performance going forward than the upgrade to Edius 7 is a worthwhile investment.   If you're committed to Edius as your future NLE then we see no need to wait.

We like the Edius has evolved over the years. We're happy the USB key authorization got abandoned with 6.5 and now Grass Valley is moving forward with 64bit development with the release of Edius 7. We hope the next steps are a subtle UI update and improved audio tools.

Visit Grass Valley for more information and all the specs on Edius 7.

And check out the recently launched Edius World micro site.