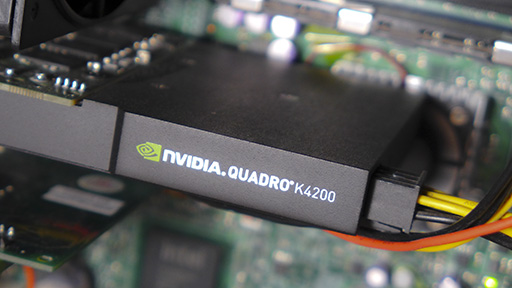 We've been doing an extended review of the Quadro K4200 and it's been rock solid. It's quiet, consumes reasonable power and helps accelerate apps that take advantage of the GPU. Since Q4 of 2014 we've been using the K4200 in one of our workstations primarily for digital content creation.

Our primary apps include the Adobe CC suite, Avid Media Composer, Sony Vegas Pro, Edius Pro and various plug-ins from Boris, NewBlue and others. The single slot Quadro K4200 sits right in the sweet spot of price/performance for these kinds of apps.

In a craft production environment, we really like the single slot design because our workstations are also used for audio mixing and mastering and we often require adjacent slots for audio and DSP cards or an SSD accelerator.

When building a workstation for content creation, two of our main considerations are performance and compatibility. When we initially installed the K4200, Media Composer gave us a warning to revert back to an earlier driver. Of course, our other apps preferred the most recent driver. So it's always possible to encounter some hiccups like this. The good news, over time, after a couple of app and Quadro driver updates all the apps seem to be happy.   Media Composer likes version 340.84 currently.

We like the performance we're getting from the Quadro k4200.  However, we can't say it blew us away compared to the K4000.   The K4000 operated much cooler than it's predecessor while offering improved performance.   The Quadro K4200 offers improved specs and continues on that path but since we're not in Maya all day it's maybe not as noticeable to us.   It really depends on your apps.   So if you're happily chugging along with a k4000 in your editing suite you may want to stick with it.  However, if you're considering a new system or doing more 3D or using an app that really benefits from the increased specs and you're looking for a lot of power in a single slot design the Quadro k4200 should be at the top of your list.

In 2015 we expect to see a nice bump in overall performance with the latest Xeons, DDR4, dropping SSD prices, thunderbolt 2 and generally improved motherboard performance, not to mention Windows 10 might actually not suck.  We're still primarily running Windows 7. The next step is for the OS and content creation apps to truly take advantage of all the processing power provided by the CPU cores and the GPU power in cards such as the Quadro K4200.   4K video is a train in the distance that will run your over before you know it.    Nice to see NVIDIA keeping it real with the Quadro lineup.

Visit NVIDIA for more information and all the specs.