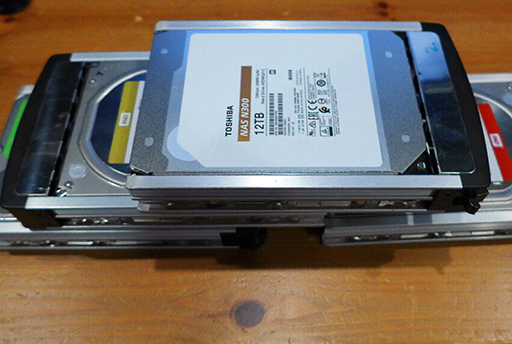 When it comes to editing you need speed, reliabilty and capacity.  You also want to use CMR or conventonal magnetic recording also referred to as PMR or perpindicular magnetic recording. Avoid newer technologies that try to cram as much possible data into the platters using technologies like SMR or shingled magnetic recording.   When buying drives for your NAS we recommend the 12TB Ultrastar from Western Digital and the 12TB N300 from Toshiba.  These two offerings offer outstanding performance, low noise, low power consumption and pair well with nearly any NAS, DAS or workstation. Plus they are the most readily available in the $320-$340 price range.  That's a reasonable price for the latest helium technology, RV sensors, stable platter technology and all the other stuff that makes these work well in a multidrive environment. The Toshiba N300 looks exactly like the MG series of enterprise drives. It's likely the exact same drive with the non-enterprise features disabled.

Yes the world is moving to SSD but when it comes digital content creation and video editing you're going to need network attached storage or direct attached storage in the form of servers and RAID arrays to store and edit terabytes and terabytes of projects. So the hard drive is as important as ever and still the most cost efficient way to online digital media.

So it's gotten simpler with only a few major players to consider. Hard drives are manufactured by Seagate, Western Digital/Hitachi and Toshiba. Each manufacturer has a variety of hard drive offerings for desktop and enterprise use. For your NAS or DAS setup we suggest using one of the enterprise offerings or a drive specifically designed for a multidrive enclosure.

We recommend buying new hard drives directly from Amazon or BH Photo. There are lots of third parties that sell drives however if you get something that is packaged funny or looks wonky Amazon and BH will handle it more rapidly.

We also are testing the Toshiba N300 series helium drives. They are fast and quiet and offer good performance. All manufacturers have gone to helium in higher capacities. Western Digital, Seagate and Toshiba have all been working on helium drives for several years. In general, helium allows more platters to be used for higher capacities. 16TB drives are rolling out. Helium drives also consume less power and make less noise and experience less internal turbulence. All of these factors make helium based drives ideal for multidrive systems.  We like the 12TB capacities for tried and true PMR style drives.

In terms of speed and performance.  All of these drives are really close.  Once you put them in a RAID array there's not much difference.

So for NAS and DAS systems in video editing environments and multiuser high traffic scenarious we advise going with enterprise level drives such as the Western Digital Ultrastar, Seagate Exos or Toshiba MG series.

So let's say you're an editor that works out of your home studio and you have an 8 bay RAID array.  Any of these drives should provide the performance and reliability you need.  We'd be comfortable with any of these drives in a RAID 10 working on 4K material running large renders.  In a corporate setting with shared resources and 24/7 workload, multiple editors on same project...etc, we'd opt for the first tier line of drives. That's it.  Stick with these major players and you should have a decent experience.  Always use the same make and model in your RAID arrays.  Currently we're running 12TB ultrastars/WD Gold, Red Pros and N300s with good performance, low noise and low heat.

The sweet spot for price/capacity/performance is 12TB as of early 2021.  There has been a run on HDDs because of the crypto mining Chia.  However you can still find the Toshiba N300 reasonably priced. Before making a purchase it's good to check the camel for pricing trends to see how the product price has been charting over time.

FIRST TIER
More on the Western Digital Ultrastar (previosly Gold) preferred.  UPDATE:  Looks like WD is bringing back the gold brand.  "powered by Ultrastar".  We like these drives in the 4TB, 6TB and 12TB capacities.
More on Seagate Exos  we like 18TB capacities
More on Toshiba MG series