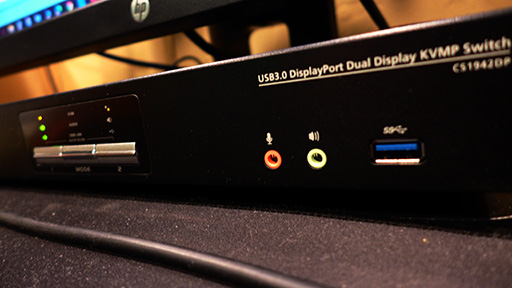 It's been a while since we needed a KVM switch and man have they evolved nicely. The ATEN CS1942DP 2-Port USB 3.0 4K DisplayPort Dual-Display KVMP switch is an excellent solution for a dual workstation setup that requires the ability to drive two 4K displays.

The ATEN CS1942DP is a professional level solution which includes the ability to share common peripherals and independently switch KVM. USB and audio. We used it to switch between two editing workstations where both units took advantage of dual displays and a wireless mouse. We didn't use the audio connections on the CS1942DP because each workstation's sound card was already connected to a mixer for audio so the mini stereo mic and speaker connections were unnecessary in our setup.

Our main interest was the ability to share a wireless mouse, wired keyboard and two displays between two workstations with maximum up-time. The ATEN CS1942DP works very well in this scenario. Each workstation has a Quadro graphics card with DisplayPort outputs to drive 4K displays. We used with various displays from HP and Dell and the ATEN recognized and scaled the image properly as if the computers were connected directly to the displays. The wired keyboard and wireless mouse performed as if they were connected directly to the computers without any perceivable lag. The computers were used to edit and color correct video and the color was accurate going through the ATEN CS1942DP as would be expected with quality DisplayPort connectors.

ATEN includes all the cables necessary for connection two computers to the CS1942DP KVMP switch. The cables are decent quality and on the shorter side. We used two workstations underneath an average size desk, one to the left and one to the right. The cables provided worked fined in our scenario. However, we could easily see a scenario where longer cables would be required. ATEN really has provided the bare minimum to make this work.

One of the main issues with using a KVM switch is the lag time from the moment you press the button until the other computer is active and the display live. The CS1942DP takes about 4 seconds to switch between computers. So it's not instant but we haven't used a KVM switch that is. It's not a big deal as we don't rapidly pop back and forth between workstations. More importantly when doing windows updates the monitors are accurately recognized when connected to the CS1942DP just as they would be if connected directly to the computer.

The ATEN CS1942DP has an excellent built quality with metal case and quality buttons. The lights on the front of the unit make it easy to identify the active computer and the status of the KVM. Our only gripe on the build or usability is the wall wart. We hate wall warts and would much prefer this unit to be shipped with a built in power supply.

At a typical street price of $329 the ATEN CS1942DP is not cheap. It's a premium unit designed for a professional environment. If you have a need for a 4k, dual DisplayPort cable KVMP switch the CS1942DP is an excellent choice.

Visit ATEN for more information and all the specs on the CS1942DP.