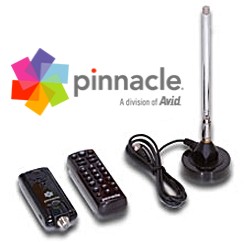 The PCTV HD Pro Stick from Pinnacle Systems is a USB 2.0 powered TV tuner that allows you to watch and record SD and HD TV as well as Internet radio and FM broadcasts on a PC. We fired it up on both a dual core AMD system and a dual core Intel system. Both systems were running Windows XP with the latest service packs, had 3 gigs of memory and separate 7200 RPM high speed drives for recording.

Installing and running the software for the HD Pro Stick (kinda sounds a like a deodorant eh?) was slow on the 4400 + Athlon system. In fact it was pretty much a deal breaker. However, on our more current 5000x based Intel system performance was better. The installation process was faster, all the default settings worked and we were able to quickly start scanning channels, snap images and record shows. Pinnacle does list reasonable specs for using this product on a PC. For best results, make sure your system exceeds them. Otherwise be prepared for a less than real time experience.

The HD Pro Stick resembles a USB flash drive with a coaxial connector on one end. It comes with a handy extender so that the included antenna can be placed higher and transitioned to the PC. Also, the slightly bulky stick does not have to hang off your computer's USB port. Pinnacle includes a cheap, small, plastic remote. It's pretty pathetic. In fact, it probably will rarely get used leaving us wondering, why bother?

The easiest way to use the PCTV HD Pro Stick is to fire up the software, tune to a channel and press the red record button if you want to record something. It's about as easy as it gets. The included electronic programming guide is pretty weak. It's not on par with Sage TV, Beyond TV or some of the others we've used. However, once you know the date, time and channel it works just fine. We actually enjoyed using the HD Pro Stick on our dual monitor system to have broadcasts running while we worked. If something of interest pops on just hit record.


The the PCTV HD Pro Stick was tested in the heart of Silicon Valley and we didn't have any problems with signal quality or strength. Included here is a recording we made of NBC's HD olympic coverage. This is a fairly high quality Flash video but it's easy to tell it was made from a very clean HD source. Pinnacle includes support for MPEG-1/2 or DivX4 formats and also includes a AV adapter cable to grab video from other sources.

So, to wrap it up, the PCTV HD Pro Stick from Pinnacle Systems does what it's supposed to do but we just wish it wasn't such a resource hog. If you have the PC horsepower it's certainly worth adding to your arsenal of toys.