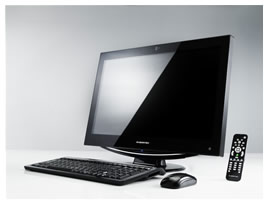 The Averatec D1200 25.5” all-in-one PC is an average desktop replacement for under $1000. The screen is large, the system is quiet and all the peripherals are built in. The system includes a web cam, TV tuner, slot loading DVD burner, basic sound and built in Wi-Fi.

Our system, the D1205XH1E-1 version,  came loaded with Windows Vista Home Premium, 2.5GHz Intel Pentium dual-core CPU, 4GB of memory and a 320GB 7200 RPM hard drive. It also included a pre-load of Norton Antivirus which actually slows down the initial out-of-box experience, more on that later. The power button and other buttons on the front for adjusting the brightness of the screen are hard to read in low lighting and the reflective screen wouldn't be our first choice. It’s a PC first and TV second after all.  That said, it's a good looking unit that would look fine in a den or bedroom.

All-in-one systems are good for anyone that wants a turnkey system and cares more about convenience than specs. These types of units keep getting more compelling as the PC market evolves and the trade-off is not so great for everyday computing. The D1200 series retails for $999. A decent 25.5 inch monitor from a leading OEM such as Samsung sells for $300-$400. So you figure $500-$600 left for the system and peripherals. Sure you might be able to get a bigger hard drive and better specs overall if you piece everything together yourself. But this system is no slouch and it handles regular everyday tasks with aplomb. Web, Office, Picassa... repeat.  Web, Office, Picassa...repeat. Toss in a little Skype.  Make a greeting card.  Burn a CD.  Rip some MP3s. You get the picture. Again, the D1205XH1E-1 is not a speed demon but a reasonable multitasker with minimal fuss.

Moving the Averatec D1200 around is bit cumbersome. It’s not overwhelming but a 25.5 screen and all the components, power supply…etc., gets a bit heavy. So mom might need some help moving it around. The kids in the dorm room will be just fine.

Getting started couldn’t be easier. Plug in the power and put batteries in the wireless keyboard and mouse. That’s it. Things were really going good until we we’re greeted by the Norton Antivirus signup screen. That’s pretty much the last thing we want to see when starting up a brand new computer. Talk about a buzz kill and it just really ruins the OOBE, out of box experience. Why not wait until the user has at least done something with their new toy before badgering them about signing up for antivirus ware? It’s dangerous out there, we get it, but it already takes 10 minutes for Windows to do its thing during the first boot and here comes Norton.

The D1200 includes both wired and wireless network capability, plenty of USB ports, e-SATA, SPDIF and analog audio ins/outs for plenty of connectivity options. We pushed it in the lab in a very unfriendly environment and it performed similarly to other desktop and laptop systems with built in components.

The D1200 comes with Window Media Center. It works for a variety of media tasks from burning a CD to recording TV shows. The tuner was having trouble with our Comcast lineup and we didn’t spend much time troubleshooting. We’d primarily watch video form a DVD or USB drive anyway and these both work fine. We like the slot loading CD/DVD. It’s perfectly placed in the top right corner and easy to operate without actually seeing any buttons. The 24X CD burning capability is half the speed of what you would normally see in a full size drive but for casual use is fine.

The keyboard, mouse, and remote control that Averatec includes with the D1200 feel cheap. The keyboard feels mushy, the mouse click seems a bit louder than usual and the remote control for the built-in TV functions is kind of flimsy. Surely, Averatec kept costs to an absolute minimum with these components. The mouse and remote work fine but we’d immediately replace the keyboard.

Overall, the Averatec D1200 is a solid all-in-one offering. It’s attractive, quiet and hassle free. If you’ve got room for a 25.5 inch unit and simply like the idea of a cleaner installation with less cords and components it’s certainly worth a look. It’s not going to break any speed records but it also won’t break the bank.