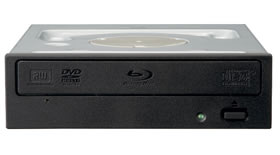 The BDR-205 from Pioneer is an internal Blu-ray Disc/DVD/CD burner with write speeds up to 12x on BD-R (25GB) and BD-RL (50GB) media. So to put that in perspective 1 dual layer disc is the equivalent of 10 separate DVDs.

Pioneer has been at the forefront of DVD and Blu-ray technology and the BDR-205 is a good example of this tradition to produce quality, leading edge products. The BDR-205 is made in Japan which is usually a sign of quality when it comes to electronics. (opportunity here to make joke about drive by wire systems in Toyota cars but we'll pass).

We installed the BDR-205 in an HP workstation that already had several hard drives and optical drives installed. Since we were out of SATA ports we used an open SAS port instead without any problems. Pioneer bundles a bloated software package called BD Solutions from Cyberlink that takes forever to install. It’s okay for watching Blu-ray movies but we found it slow, cumbersome and marginally useful for mostly everything else. We preferred our own authoring tools that we’ve grown accustomed to. Newbies may appreciate the Cyberlink package but boy is it a hog.

We recently completed a high def product for a client that wanted both DVDs and Blu-ray discs duplicated. We have a disc duplicator for CDs/DVDs but have had very little demand for Blu-rays. So in this case we manually loaded the discs in and out of the BDR-205. The small run of 25 discs went smoothly without any coasters. The drive is smooth, quiet and works as advertised.

Prices have really come down on Blu-ray burners with the BDR-205 currently hovering around $200. The price of blank media is still pricey compared to DVDs but much more reasonable than just a year ago and the quality and consistency of discs has gotten better as well. Premium, printable media however is still hovering close to $5 a disc.

If you’ve finally decided to take the Blu-ray plunge our current recommendation is the BD-R 205 and we expect Pioneer to remain at the head of the pack based on its pedigree in the optical drive business.