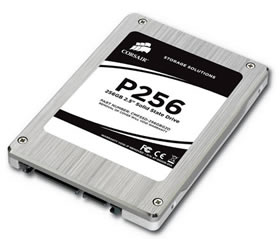 The Corsair P256 SSD is a SATA-II compatible 2.5 inch drive. Like other SSDs it offers faster performance and potentially better endurance. However, unlike high performance hard drives that include a 5 year warranty the P256 only includes a 2 year warranty which we found odd considering “toughness” is one of the selling points of SSDs in general.

Unwrapping the P256 is a bit like unwrapping air. SSDs are deceiving in that they don’t feel like much, just a little brick of silicon with some connectors. But in this case the featherweight is actually the heavyweight. The Corsair P256 SSD has all of the performance minus the bulk, noise, power consumption and heat of a traditional high performance drive. Of course, it’s a lot more expensive and offers only a fraction of the capacity but its responsive and stable performance will be attractive to many.

When we received the Corsair Performance Series P256 SSD we decided to test it a couple of ways. First as a dedicated drive for HD video editing and second as a system drive with OS and apps. What would have a bigger impact? What would we notice more? What would we simply enjoy more?

First we swamped out a Hitachi 7200 RPM 1TB drive we were using for video storage. We copied over 1 hour of HD footage and resumed editing a project to see if the response would be any different with the P256. We also repeated the process with a Western Digital VelociRaptor 10K RPM drive. These are real world tests where we use the product versus running arbitrary benchmarks. The P256 was noticeable improvement over the 7200 RPM hard drive but not so much with the 10K RPM VelociRaptor. However, the P256 did reduce the noise in the editing room with one less hard drive spinning.

Next we cloned the VelociRaptor system drive and replaced it with the P256. Our boot up and shut down times weren’t noticeably different. However, opening and closing applications was snappier. Lean apps like Saw Studio were truly instant on while chubbier apps such as Sony Vegas still take some time. Firefox and Fireworks were instant on. So it depends on the app but in general we noticed the improvement even compared to a very fast 2.5 inch version of Western Digital’s 10k RPM VelociRaptor. Some changes were dramatic in unexpected ways. For example, we often experienced a several second delay opening Winamp. With the P256 it was instant.

The Corsair P256 is an excellent way to add performance and stability to a system that’s a couple of years old or to use as the foundation for a new high performance system. The most noticeable improvement for us was when we installed it as the main system drive. It made the system feel more like hardware and less like software. Is it worth the premium over the 2.5 inch VelciRaptor? It absolutely is for a work system where uptime is critical. For a home system with an online backup system such as Mozy in place, it’s hard to justify.

In the last several years we’ve seen hard drives fail in our systems after only 1 year of use and usually at the worst possible moment. Yes, SSDs are very expensive but we’re getting very close to the price point where that extra performance and piece of mind will be worth the premium. It’s very early in this game but it’s easy to imagine a near silent PC with almost no moving parts besides a few fans whirring inside. 2010 is shaping up to be the year where the silent SSD starts making some serious noise.