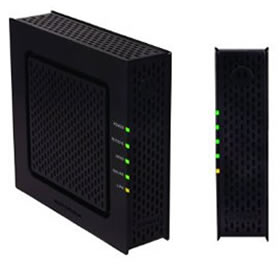 The Motorola SB6120 cable modem is the next generation DOCSIS 3.0 compatible modem which provides a 4x speed improvement over DOCSIS 2.0 cable modems such as the original Surfboard series from Motorola.

We replaced a Motorola Surfboard SB5101 for this test. On the SB6120 Motorola moved the status lights to the side of the modem so when it’s placed in a wiring closet of a house it’s easy to check if it’s online or not without removing it. The older SB5101 requires you to remove it to check the status and the reset button could easiy be accidentally pressed. The SB6120 is a boxier design but only takes up slightly more space than the SB5101. It’s pretty much a straight swap although the SB5101 was easier to slide into tight spaces because of its wedge like shape.

The Initial setup took a bit longer than anticipated. The Motorola Extreme SB6120 takes longer to restart and get online but once it’s up and running is rock solid. The control panel and status indicators are very similar to previous designs. Basically, get it up and running and forget it.

At lower service speeds the improvement over the SB5101 is marginal. Of course, the real reason to upgrade the modem is to take advantage of the upper tiered Internet service offered by Comcast and others. After we had Comcast turn up the speed the SB6120 came to life.

If you frequently move large files via FTP, like to stream HD video,  or have lots of data on your systems you’re backing up via an online service such as Mozy than the SB6120 combined with a faster level of access is certainly worth considering. For general web use, email and sending the occasional photo…etc., you won’t see that much benefit.