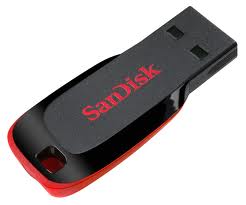 The SanDisk Blade is an ultra portable USB Flash memory drive that comes in capacities up to 16GB. The Blade has a curvy indentation that makes it easy to grab and insert or remove from PCs and other electronics. It’s perfect for students or anyone else that wants a solid portable flash drive and doesn’t require the highest capacity or speed available.

The SanDisk Blade is built sturdy enough but don’t step on it. It will survive a tumble in the washing machine but not a crushing as it’s made of nearly all plastic.

Our favorite use of the SanDisk Blade is for moving movies and music from the computer to the TV and car. Many DVD and Blu-ray players include a USB port on the front of the device and support myriad codecs of pictures, video and audio. Ford, Hyundai and other tech savvy car manufacturers are all including USB ports in its vehicles.

The SanDisk Blade is perfect for this. The reason is the Blade is nice and short so it doesn’t stick out too far when connected to the front of a DVD player or in the console of a car. Most USB Flash drives are too big and cumbersome and can easily be broken or damage USB ports when accidentally bumped into while sticking out of the port. The SanDisk blade can be connected to the front of a DVD or Blu-ray player and still allow you to close the media cabinet door and you don’t have to worry about it being snapped off.