A Cable Any Guitar Player Would Love 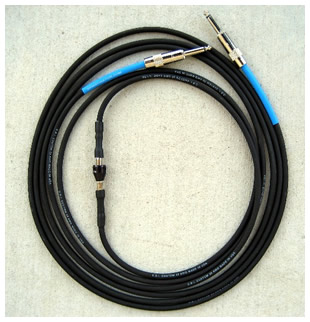 When guitar players see this new cable, they’ll say, “I can’t believe somebody hasn’t thought of this before”. Yep. Meet the Spinstigator, a clever new guitar cable that never gets tangled or twisted from all your crazy rock moves on stage.

Active guitar players used to have a couple of choices; buy an expensive wireless rig or simply untangle the guitar cord throughout the night. The third option is the new Spinstigator. This is great for the working musician or even someone practicing at home. Even if you only move around a little bit with your guitar you can get pretty tangled up in just a half hour. Check it out next time you’re at a bar or wedding. Watch how the guitar player has to untangle the guitar cord nearly every set. It’s not fun and it certainly doesn’t look cool nor professional.

We tested the Spinstigator with a Rickenbacker and Strat. One of the best things about using this cord versus a wireless rig is the sound. It sounds just like a regular guitar cord but without the hassle, noise or interference of a wireless system. I love this product because it’s classic problem solving at its core. What makes guitar players crazy? Twisted cables and drummers that play too loud. Here’s a solution invented by a guitar player and made in the USA that addresses the first problem. You're on your own with the crazy drummers.

The Spinstigator folks claim this guitar will last longer than a regular cord because the copper wire inside isn’t getting bent into knots all the time. It’s very quiet and makes no noise whatsoever so your playing is always nice and clean. The electrical connection in the rotating device is being made with mercury, a liquid metal, so it’ll never get that static, scratchy noise like dirty volume knobs on a guitar or amplifier. There’s constant electrical contact being made all the time between the moving parts. The flexible 20 gauge cable and G&H connector ends are top quality, too.

Players that already use cords instead of wireless will love this because it’s simple and they’ve got the same direct signal they want, and a few wireless users may jump back to using cords once they try this little funky little deal. Of course, this is not for everyone. Obviously if you’re a player running around on an arena sized stage this won’t cut it. However, for most users, this will be a nice change from the receiver, transmitter, batteries, wall wart, interference and the “I don’t get exactly the same tone and gain” problems associated with wireless.

The Spinstigator comes in four convenient lengths so players running to nearby stomp boxes or all the way to their amps should be covered. This would make a great Father’s day gift or stocking stuffer.

Visit The folks at Spinstigator for more information and to watch a video of this cable in action. Made in the USA.

Edius 8.22 from Grass Valley is the latest update that adds LUT and tracking support.…

We've been doing an extended review of the Quadro K4200 and it's been rock solid. It's…

The PX270 is an amazing HD camera for ENG, corporate and documentary work. Over the years…

kind of like the chill Mazzy Star vibe of this

James Bond - No Time To Die

They could actually make this.

The Fall Color of New…

Early October is a perfect time to see the color in New Hampshire. If you ever make the…

John saved Twist and Shout for the end of the day. The Beatles banged out this entire…

waiting for the rainy season with this vibe spinning

Marina - To Be Human

Mesmerizing, nice change in the hook.

This is just awesome. Makes you want to live in the midwest. Imagine the kids using that…

Nice job recreating a music video from the heyday of music videos, the 80s.

The 24 Hours of happy was groundbreaking when released over 5 years ago. The dancer at…