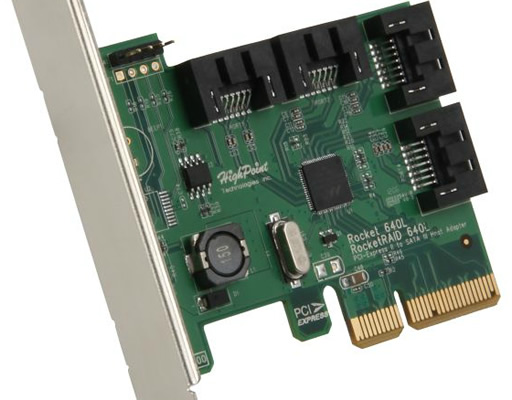 We tested the 640L in a Supermicro 7046A-3 workstation that needed to be upgraded to SATA III in order to take advantage of faster HDD and SSD products. The hot swap feature is a must for this workstation that features 8 easily accessible drive bays on the front of the case. The Rocket 640l worked well in this scenario.  It's so nice to be able to simply pop drives in and out of the system without having to power down to do the swap.

Installation requires a little effort and could be more seamless. It's not true plug-n-play in Windows 7 but it's not difficult either. The documentation is just plain bad.  HighPoint has the latest firmware and drivers ready for download on its website which we highly recommend. The card comes with a set of SATA cables and brackets for full size and low profile installations. The ports on the card are easy to get to provided the workstation isn't fully populated with other cards.

Performance was noticeably faster than the onboard SATA II controller and resulted in an overall better experience especially for applications that push the I/O bottlenecks such as video and other creative work.   So if you have SATA III drives in a system that doesn't support them the HighPoint Rocket 640L is a good benchmark for entry level performance.

We primarily used the 640L to provide 4 discrete SATA III ports and did not test its RAID capabilities. For our purposes, adding 4 hot swappable SATA III bays to our system was well worth the current street price of about $70 for the HighPoint Rocket 640L.